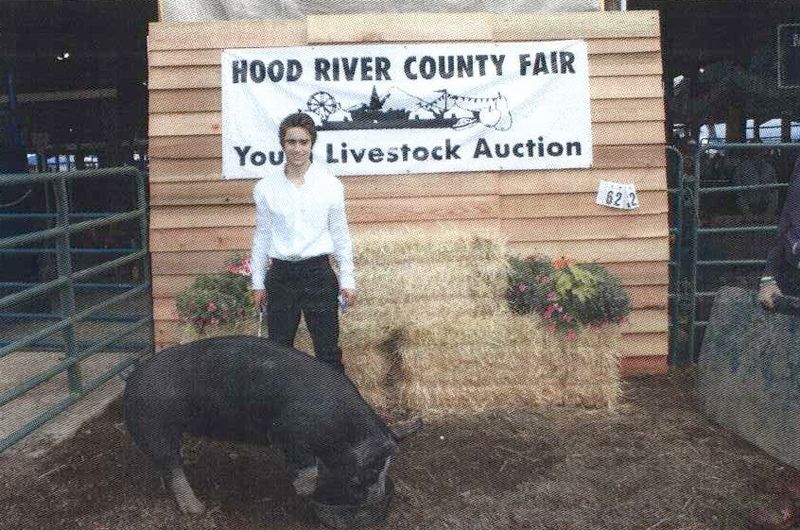 My nephew is involved with 4H and raised a pig to auction off at the County Fair. He has raised many pigs and I have heard of the fair antics through “Fair Reports” that my sister writes each day of fair every year. Because of these reports I was well versed in what is expected from the pig and the handler. I watched Austin enter the ring for the first round and saw his fabulous smile and great eye contact with the judge as he moved his pig around the pen with a small stick. Tap, tap, the pig moved to the left. Tap tap, the pig moved to the right. He took second place and so would return for a runoff a bit later.

It was to his mother’s distress that this 17-year old told us before he entered the ring again that he was only going to shoot for second.

On the next day of the Fair, Austin entered the ring. Rather than showing the judge his fabulous smile again, he gave the judge a quick glance and then looked down at his pig. He gave the pig a couple of gentle taps with his stick, trying to move it from one side of the ring to the other. The pig must have felt Austin’s lack of authority, because it certainly was not behaving like it had before. Then the judge instructed Austin to direct the pig from the larger pen into a smaller one. Tap tap tap, he tried to head the pig over to the left. It went to the right. Tap tap on the right. It went straight ahead. The gentle tap taps turned a bit more urgent, but still the stubborn pig would not head into the designated pen. Try as he might, he just could not direct his pig into the pen. After what seemed like an eternity, but was less than five minutes, the judge gave up and we all recognized that Austin would not be getting his pig into the pen.

When the results were announced, Austin’s fine pig placed not first, not second, not even third. It placed dead last.

After the ceremonies, I asked Austin, “so how did your plan work out for you?” He told me it was a little frustrating. I said, “yes, when you aim for something less than first, you are guaranteed a subpar result.” I explained that what happened today was a bit like parents and managers feel. We tap, tap and try to direct you, but sometimes, it just doesn’t work.

And as I relayed this story to the employees of CD & Power, and shared that there had been some tap tapping the day before both by me and to me, I was thinking about leadership. It’s a funny thing how when you aim high, your team knows it and follows suit. That’s the way I have approached my role as General Manager at CD & Power for the last 22 years. We strive for excellence and being the best we can be, and now the company is known for that.

That pig was trying to give my nephew a lesson. I hope he gets it.