The purpose of most generator sets is to provide a trustworthy source of power for your facility or business during an emergency situation when the power is out or not available for some reason. In the event of a power failure, there should be no doubt that your backup power source will kick into action and get you back up and running.  But what happens when the power goes out and your genset does not operate the way it is supposed to? The results can often be costly and sometimes disastrous.

What is Load Bank Testing?

A load bank test ensures that your generator will run when needed so that you can count on it producing  power during any kind of emergency that may arise.  A proper load bank test will give you an evaluation of your generator at its full kilowatt output rating.  Many generators don’t regularly operate at their full kilowatt rating.  It’s very important that the generator produce the horsepower that’s required for it to run flawlessly when that power is needed, while maintaining the right temperature and pressure levels and allowing  it to run for long periods of time. 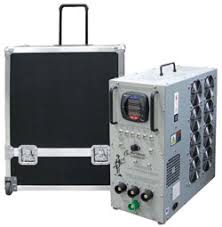 What is Done During a Load Bank Test?

When a load bank test is started, an artificial load is placed on the generator. The test is timed and the  kilowatt load is  gradually increased in  specified increments.  Every time the load is increased, critical engine functions are measured at the highest possible levels for a sustained period of time. To complete the test, a load bank is needed (a machine with kilowatt rated sizes and battery type cables).

When a diesel powered generator is not used very often or is only run on light loads, it can experience unburned fuel and soot buildup in the exhaust system. This is called “wet-stacking.”  Wet-stacking usually  happens when the genset is not performing the way it’s supposed to.  This may lead to damage or become a fire hazard and can even lead to the generator not working at all.  During a load bank test, the generator is run at full operating power and temperature. This will cause any wet-stacking to burn off.   Load bank testing actually serves two main purposes:

There are many reasons why gensets should undergo a load bank test on an annual basis, including:

Load bank reports should  include: